These tempering balls when used in kulambus give a distinct flavor to the dish. We make this during the month of February and March though the official summer season begins from April. It is said to prevent them from dust during the strong winds during the summer season. Earlier my grandma used to make them and we as kids will sit under a nearby neem tree's shade and guard them from crows and other birds. We will be supplied with lemon juice and watermelons for our big help. Now my MIL makes them and keep us all supplied. 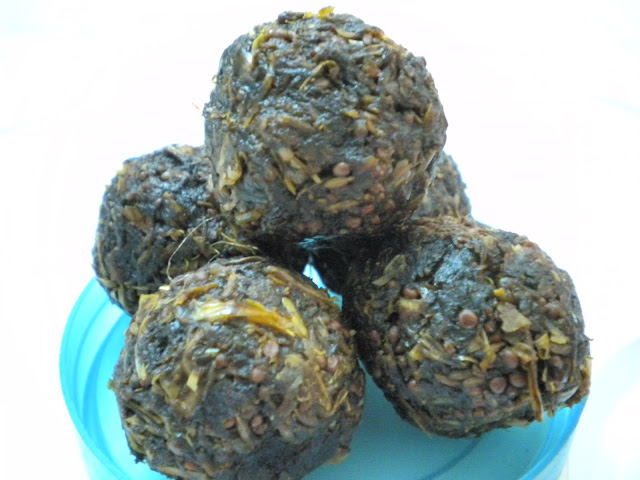 Soak urad dal for 1 hour. Peel the onions and divide it half. Keep the on e half as whole and chop the other half of the onions finely.  Drain the water add the red chilli and grind it together coarsely as you would for vadai batter. Before taking the batter add one half of the peeled whole onions and grind together again. Remove the batter and transfer to a vessel.
To this add salt, hing, chopped onions, curry leaf, coriander leaves, mustard and mix well. Add the castor oil at last to prevent the batter from sticking to your hands. This also acts as the binding agent. Mix well.  Make small balls and sun dry them for at least 3 days on a plastic sheet.
Store in air tight bottle and use as required for tempering around ¼ tsp to ½ tsp and not more, as the whole gravy will get a predominant smell of these vadagams. Also the castor oil added might give a bitter taste when added more than recommended.


When dried properly these balls can be stored for many years. They tend to turn blackish during the course of time. No need to worry as this won’t spoil at all.